Getting some riding in. Feel like a storm has been raging for a while. Maybe it will clear soon. Its heartening to spend some time communing with nature. Even if it leaves a tattoo on your shoulder to remind you of a bone shaking impact on a new trail...
Posted by dRjON at 9:35 AM 1 comment: Been talking to sean. Seems we have some numbers worked out...thanks to cy and dave for additional advice.
Posted by dRjON at 9:32 AM 3 comments:

If you are not already reading 104 Bronson, you probably shouldnt. But just in case....
Posted by dRjON at 9:28 PM No comments: Been tinkering. That there is a DT Swiss 440 freeride hub. But it is a little odd, not that many were made (apparently). For my uses it is damn near perfect. It usually comes with a 9 speed free hub body and needs some dish. This one has equal flange spacing (so no dished wheel). Hand serviceable and will take 6 speeds. It came as a 150mm wide 12mm axle. With a little tinkering, i now have it set up 10mm 150 RWS thru skewer.

Have i said before how ace DT stuff is? its all pretty much interchangeable in terms of end caps for 10mm or 9mm thru axle or RWS, quick release skewers or up to 20mm for the front, with adaptors for 15mm, and 142/12mm a la the Syntace system. All beautifully made with exact tolerances, durable bearings and quality finish.
Posted by dRjON at 8:45 PM 1 comment: So i had a chance to have a chat with Sean Chaney at Vertigo Cycles. Looks like i have a project to work on. I have no expectation to see this within 6 months but its going to be a good one.

Concept: 29er am hardtail. Influences first and foremost my Jones. Basically i want the same ride characteristics with a 120mm fork. Use is going to be alpine and down grade looning.

83mm bb, with single ring to 6 speed rear on a 150mm bolted axle. I've picked up a hub that makes the whole thing click and allows a dishless rear wheel. (pic is curiaks, hub is the same) 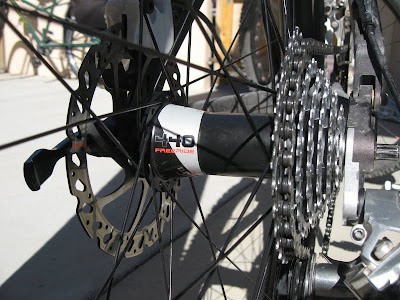 There is a lot of details to sort out, but i'm aiming at a 20mm reba with 120mm travel at present. So i bought a road bike. After much deliberation and some sideways looks at ebay, i decided it would be best to test ride and then make a decision. With the help of Dave-chops-optional at Alpine Bikes, i was fitted tirelessly on several bikes and given the opportunity to ride them to check for fit and comfort.

In the end i went for a cannondale caad 8 Tiagra, size 54, with triple chainring. Having not had a geared bike for 10 years, and never had a proper road bike, i was impressed that a low-of-the-mid end bike could be as light, function as well and have as many features as it did. I guess thats progress for you.

I then decided to get out for a ride to check this road riding thing out.

Glasgow on a frosty morn led to views as i climbed out to Mugdock and then onto Aberfoyle. First mistake: there is no road from here west...when i have done this previously i have gone off road albeit on flat dirt road. Oh well, over the Dukes Pass it is.

Good climbing. Getting used to the short wheelbase (relatively) and the stiff bb area. I cant see me ever going into the small chainring tho' not in the uk at least. We'll see. It can't weigh that much...

Then click up into top gears and tuck for the decent. Weight distribution good. As was noted when i was trying them out, the 54 cannondale seems to have plenty reach and excellent steering and weight distribution for my size, even though on paper it seemed small.

The road past Brig O'Turk is partially flooded and there is a new trail following the road into Glen Finglas...Hmmm.....

Thence to Calendar, a quick sausage roll and irn bru (its very cold now) and onwards. My plan was vague, i wanted to duck off south back to glasgow shortly, but had forgotten the road that does so led straight back to Aberfoyle. So, onwards to Doune and Stirling. Would i have enough light? maybe....it was a clear day after all.

With a tail wind, the road passed easily as i sped to Stirling. I.m not sure normal reach bars are my thing. I like the length of the stem to the tops, but the hoods seem maybe a cm too far....and i'm not sure i want to move the saddle forward. We'll see.

At Denny it went dark like someone turned the lights out. Again, i had not looked in detail at a route, so even though i wanted to return directly to Glasgow, infact i had to go via Kilsyth. The roads i had been on for the last hpour and a half had been unpleasantly busy. I guess the M80 road works were responsible for the back-road traffic, but i wanted off. The road to kilsyth approaching rush hour, in the dark, with no pavement and lots of winding up and down was horrific. Yes drivers screamed at me with their windows down to get lights, get off the road etc, but what were my choices? i had made a mistake and just needed to bash on, pull off when it got too busy and just try and stay safe.

A puncture in Kirkintilloch as the temperature was plunging meant my plan to take the canal back to Glasgow, and thus be off the roads, was deemed insensible. "trina! help!" i tried to warm up in the Stables pub as trina rushed to my rescue, but i had to hide under the duvet to get my core temp up.

So: what did i learn. Road riding is more than just riding. Planning routes is going to be important.

75 miles took me way longer than anticipated. 5 hours in point of fact. Either my legs are slow, or the gears don't necessarily mean average speed is huge.

Heavy traffic and bad roads are not fun.